To take Microservices into production, you need to make sure they are communicating securely and reliably. We explore using RabbitMQ as an alternative transport for SenacaJS microservices and show you how easy it can be to plug Compose RabbitMQ into your microservices stack.

In a previous article, we demonstrated how to build microservices with Javascript using SenecaJS. SenecaJS is a library for building Microservices in Javascript that uses JSON messages and executes actions depending on whether the message matches a pre-defined pattern. By default, SenecaJS transports these messages between microservices using HTTP and has a direct TCP message transport bundled with it as well.

Let's take a look at this by setting up a new project and creating two simple SenecaJS Microservices and connecting them together. Create a new directory to house your project and initialize a new NPM module there:

This creates a simple microservice that receives messages via HTTP on port 10101 (the default for the SenecaJS HTTP transport) and listens for messages that have a pattern with a role or foo and a cmd of ping. SenecaJS will pattern match on the messages you send and execute that function if the message matches that pattern. Your messages can have any format you'd like. However, it's a strong convention in SenecaJS to use the keys role and cmd to identify a service you'd like to call and the action you'd like to perform in that service.

Finally, let's create a small example application that connects to both of these microservices as a client and executes actions on each of them:

To run the application, you'll need to run all 3 processes at the same time. You can do so in three separate terminals, or you can run them all in the background like the following:

The startup order is important here - make sure you start the app.js program last. You should see output like the following:

SenecaJS command pattern matching doesn't stop at application code. All of the services in SenecaJS use pattern matching, including the transport layer. This means you can build an application using one transport system and then swap it out with a different one later on in development with minimal impact to your existing system. To demonstrate this, let's switch out our HTTP transport with one that can talk AMQP. That's the protocol that RabbitMQ uses natively and plugging into RabbitMQ also gives you a whole new flexible layer in your application stack.

The first thing we'll need to do is spin up an RabbitMQ deployment on Compose. Since RabbitMQ on Compose uses TLS encryption, your messages can be safely passed from one microservice to another. Log into your Compose account and click on the deployments tab and click Create Deployment.

Then, select RabbitMQ from the list of available deployments. The default deployment settings will be sufficient for now, but if you want to change RAM settings or the name of the deployment you can do so here. When you're ready, click Create Deployment: 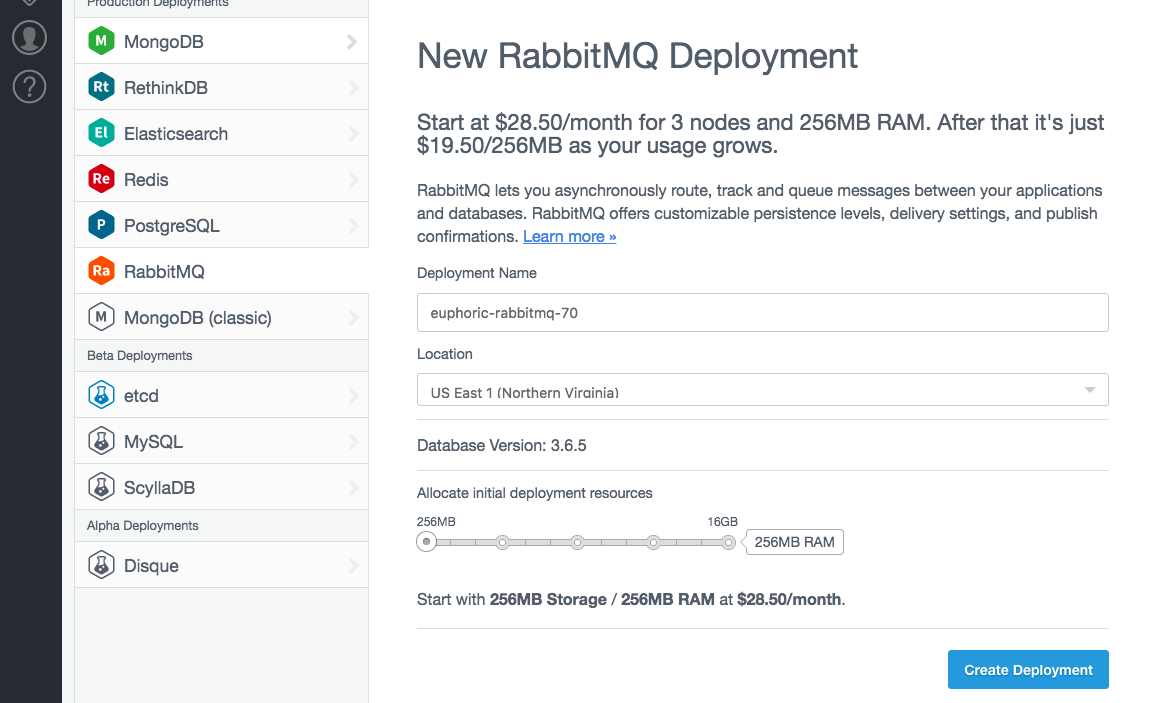 Once your deployment is created you can use the data browser to create a new user. The user credentials you create now will be used to connect to this deployment of RabbitMQ:

Now, let's go back to our microservices and configure them to use RabbitMQ. First, install the seneca-amqp-transport node module by using the npm command:

Then, we'll configure our Seneca application to use the seneca-amqp-transport plugin. Copy the url from the Connection strings section of the deployment page: 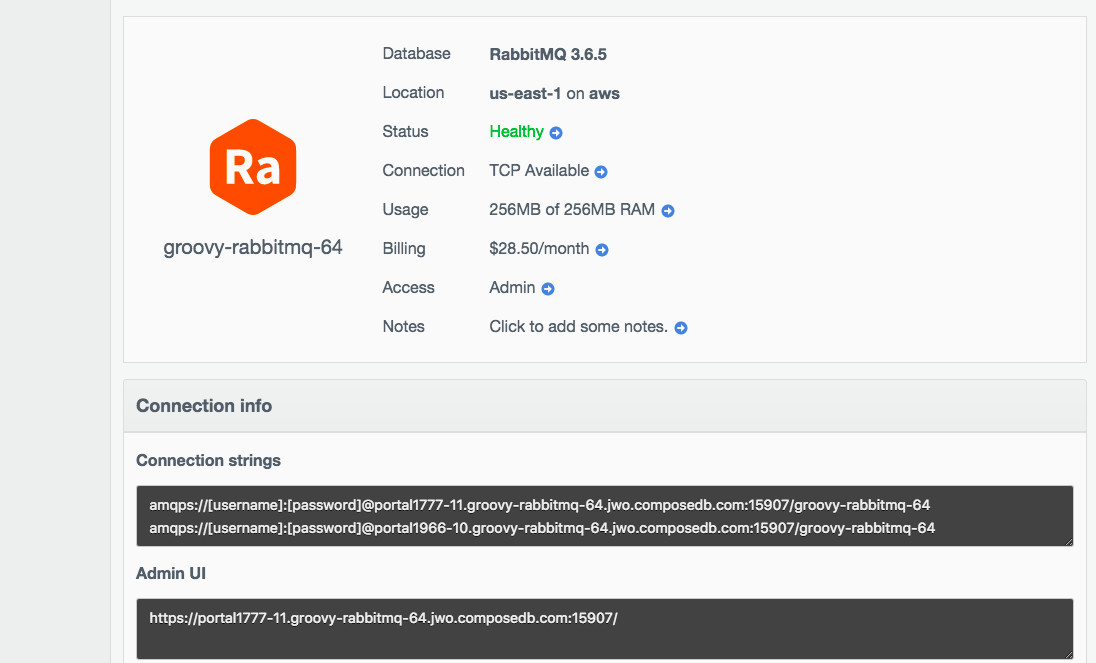 Notice that RabbitMQ on Composes uses a URL with the amqps:// protocol. This is how we know our connection will be encrypted using SSL. Paste the URL with the new connection settings into each microservice:

Inspecting Messages with the Admin UI

One of the major benefits of using RabbitMQ as a message transport is the ability to view connections between microservices and the messages being sent over those connections. RabbitMQ on Compose provides a handy administrative UI so you can quickly and easily view different properties of your messages.

To access it, log into your RabbitMQ deployment and scroll down to the Connection Strings section. Beneath the URL for the Admin UI, click on the open button to open the UI in a browser tab.

From there, you can view stats about the various connections, channels, and queues being used by RabbitMQ. You can also details of the messages being sent between different microservices there as well.

Transporting of messages is a critical piece of any microservice-based application, and using RabbitMQ to transport those messages makes your application more robust and fault-tolerant. SenecaJS with its pluggable architecture makes swapping out transport mechanisms easy and fast.