Compose Notes are designed to keep you up-to-date on the smaller changes occurring within Compose. In this edition, a new notifications switch for Compose Redis deployments, PostgreSQL's SQL directly and the deprecation of the New Relic addon.

Redis gets a KEA switch

The sharp eyed amongst you will have noticed this new panel in the Compose console's Redis Settings.

This new switch lets you reliably tap into a neat Redis feature, the ability to plug into the changes going inside the database. It's called keyspace notifications and you can read about them in the Redis documentation but simply, once turned on, you can subscribe to a stream of changes taking place inside Redis. All you have to do with a single Redis is set a configuration variable, notify-keyspace-events, to "KEA", and then use psubscribe to listen to the messages.

If it's that simple, you may wonder what it's doing in the Compose console. The reason is we don't run a single instance of Redis, we run two instances of Redis in a high availability configuration. While all the data is replicated between the two Redis servers, configuration changes aren't. That means if you turned on keyspace notifications on one Redis server and there was a failover, the other Redis server wouldn't have the setting turned on. So on the Compose platform we maintain the configuration settings like that outside the database and we've now added this switch for keyspace notifications. When you use it, both servers get the new setting and it's retained outside the database to ensure we can restart the databases to a known state when needed.

So, if you need keyspace notifications on your Compose Redis, use this switch to reliably turn it on and off. If you have a need for other settings, open a ticket and we'll use your feedback in future iterations of this control.

Sometimes, you just need to execute an SQL statement and don't have time to run psql or pgadmin. With that in mind, we've introduced a new early access feature in the PostgreSQL data browser that lets you do just that. Once you are browsing one of your databases in the data browser the SQL tab will appear in the left hand tab bar. Selecting it will let you enter and run any SQL statement as a user with admin privileges. 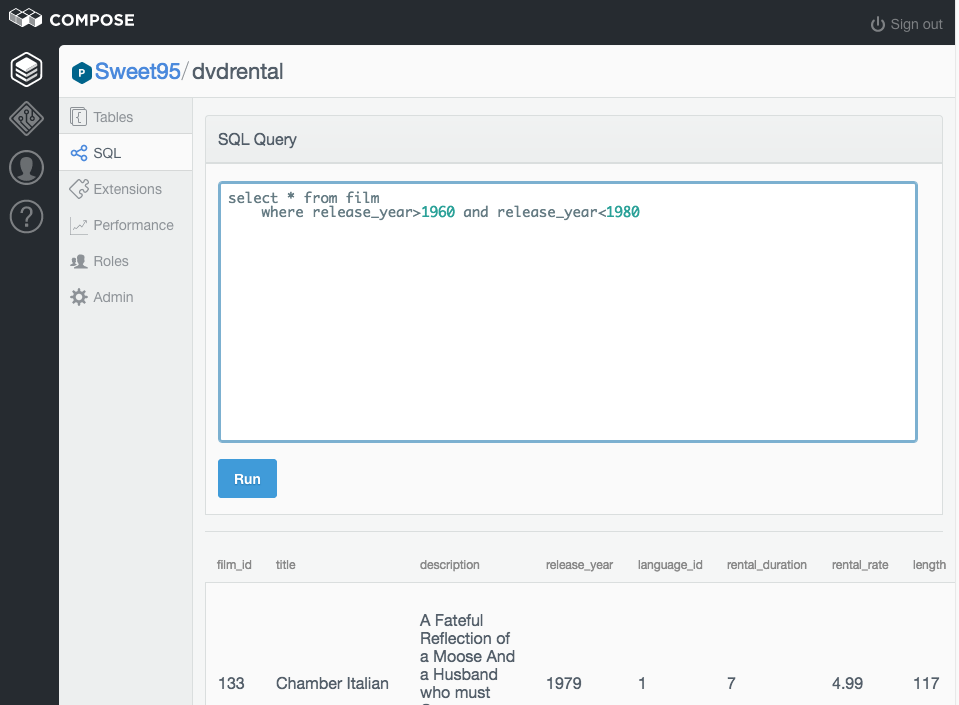 Results are displayed below the SQL entry box as a table. We'll be working on this feature to add more functionality to it over time; if you find it useful, let us know.

We've had to begin deprecating the New Relic addon we introduced last summer. It has not been performing as well as hoped for customers and issues around the sustainability of the underlying technology have led us to make this decision. As the first step in the deprecation process, we are making it unavailable to add to deployments. If you have already deployed the addon, you'll be able to continue to run it and reconfigure it, but if you remove it you will not be able to add it again. Our focus going forward will be on non-service specific alerting tools which have, at least, the potential to integrate with multiple open and proprietary platforms.