We're a widely distributed company with a combination of offices and remote working around the world. It's second nature for us to handle video, audio and text conferencing in our working day, but there was a challenge to remote working we'd never previously considered - celebrations. Sometimes you find you want to bring everyone together to celebrate an achievement. We found that time had come at MongoHQ and decided that a global remote pizza party would be the way to do it. 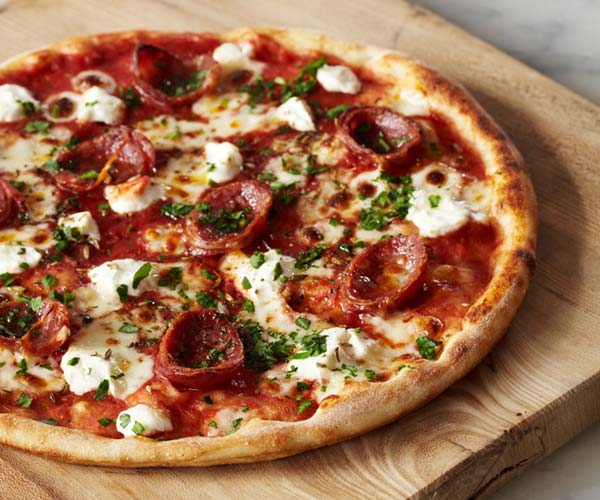 The plan was simple on paper. One person would be tasked with collating the pizza requests and pizza suppliers as delivered by all the locations. A time would be selected which would optimally bring as many people to the party as possible. The pizza collator would then book the pizzas for that time and... as that time approached, everyone would gather on Google Hangouts to watch each other receive and consume the delicious comestibles while chatting.

The first and foremost thing to remember is the timing. It's amazing how well people constantly correct and compensate for mis-scheduling between time-zones, but with a party, you really want it to start at the same time. In our case, the scheduling was done forgetting that London and the rest of the United Kingdom are basking in "British Summer Time". We are assured by our British team that this is a thing which runs through the less wet months in the UK and is not an ironic gag that they pull to confuse tourists.

So get yourself a good world clock which knows about daylight savings times and ideally lets you figure out times in the future. Use a web application like timeanddate.com's personal world clock or a desktop application like Seense's The Clock to make sure you have got the right times. We were lucky and noticed the timing error an hour before the party was due to start in the other locations. A couple of quick calls to the pizza providers allowed us to ensure that we were back on party schedule.

The second thing – be ready to discover that when the one person ordering all the pizzas for all the locations does so, it will be a complicated task with surprises. One surprise for example is when our credit card gets put on hold. You can't really blame the credit card company as they saw us placing orders with our card in 12 different locations around the world. Be aware that can happen, schedule in extra time to allow for it. If you have more than one card you could use those or just be prepared to listen to credit card company hold music while they unhold your card.

The third thing – get in early. Make sure your video hangout is up and running before start time and as many people as possible are on it. Where you can expect meetings to have people dropping in and out depending on time demands, a celebration can get mighty muted if the first ten minutes are people fighting with the virtual door to the room. Global remote parties have a small window of opportunity and you want to maximise the time.

Fourth thing – it's especially easy to forget with a remote global party why you are holding it. So make sure that someone says a few words to declare the party officially on. It's not an event till you make it an event.

Finally, remember, have fun – whatever you've achieved, you've earned some fun and some pizza, so enjoy both. And that's how we do it at MongoHQ.