Compose customer, Interloop, has launched a "sales execution and forecasting platform" — powered by IBM Watson® and Compose-hosted MongoDB — to help businesses understand where to focus to close more business predictably.

Interloop was one of a handful of companies selected by IBM to participate in an early-access program for IBM Watson. Along with other startups, IBM took Interloop through a 45-day onboarding for both Watson and Bluemix, IBM's cloud platform-as-a-service. And today they are releasing version 2.0 of their sales execution platform designed to assist much of the manual work that sales teams do today.

Founded as a sales consultancy by Tony and Jordan Berry in October 2015, Interloop set out to provide sales teams with the kind of training that had traditionally been done through mentoring, classes, and hard-won experience.

As Tony explained, "Reps are spending a lot of time trying to research clients mainly because there are so many people involved in a sales decision now. In fact, on average five to six people are involved in a B2B sale. They're typically cross-functional. They typically have conflicting interests and may have different buying personalities along with everything else. My background was you always address that by basically teaching reps how to read a room, how to read people, how to navigate to build consensus with the buying group."

A typical B2B sales process begins with a research phase to gather all the data about a business and team. Often, sales teams employ interns or other operational team members to build databases that map their buyers' infrastructure, personality types, and needs. It's typically a slow and expensive process. Traditional CRM systems have struggled to build the kinds of sophisticated sales models that Interloop sought to make.

Jordan suggested that there was a better way to provide this kind of sales consulting at scale by productizing their efforts with artificial intelligence, and specifically the Watson API.

"We wanted to provide all of that research and information on your buyers to the salesperson so that when they walked into a meeting, they were very confident who they were meeting with, what they're doing to advance the deal," said Jordan. 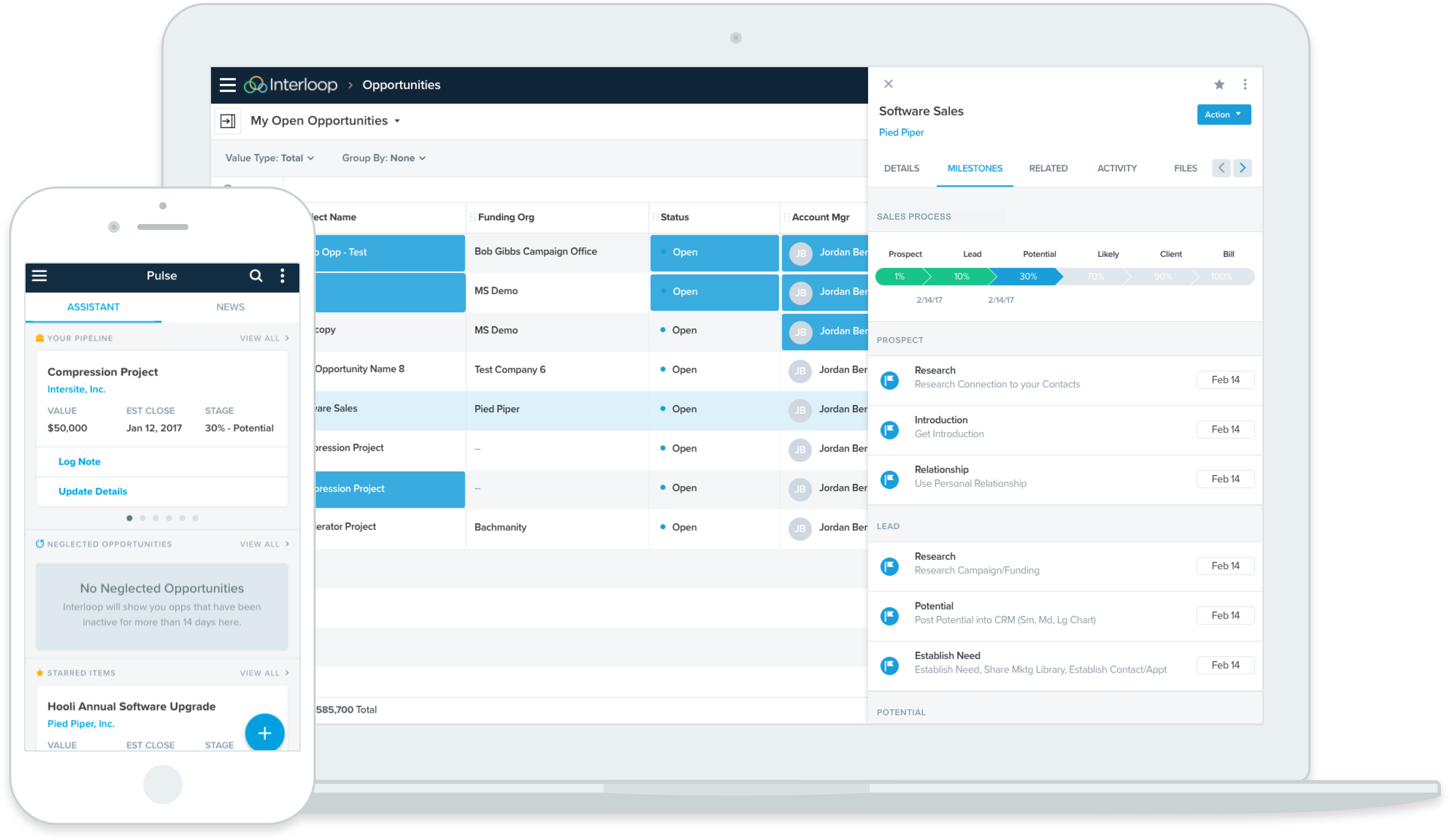 Even before Watson was trained for Interloop's application, the Interloop team had selected Compose-hosted MongoDB to build their product. MongoDB was ideal because it allowed them to build complex models that analyze the web of connections and influence related to any particular deal. Watson now has more than 7 million rows of data in MongoDB; data that can be used to build predictive models for sales opportunities and analyze the personalities of the buyers, and then make suggestions to sales reps to give them an extra edge.

Watson analyzes data gathered from a number of different sources: Interloop's customers' CRMs, email systems, and proprietary data sets, as well as public information such as their customer's social media feeds, web domains, and data gathered from the FullContact API. Interloop leverages out-of-the-box capabilities of Watson to analyze the data, but because each customer has a different audience and different kinds of data to work with, they provide custom Watson training for their clients.

"We think the real stickiness is when you train your model for a client and then the model starts to understand your business, the way you sell and the people you interact with," said Jordan.

While Watson alone has powerful learning features, the cyclical nature of using MongoDB and Watson together has an exponential benefit: the more data that's added to MongoDB, the more Watson learns, and the more it learns the more data it feeds back into the database.

"One of our customers is in the ad space, and for them we're teaching Watson how to read unstructured public data such as expenses and categorize it all correctly," added Tony. "This way, the customer can understand where the spend was, maybe some of their missed opportunities or places they need to double down in terms of some of their product offerings."

The team had been using MongoDB directly from Compose and running Node.js on Bluemix. When they added Watson to the mix via Bluemix, it made sense to move everything over to a single platform. Today, their MEAN stack and Watson are all on Bluemix. They also use LoopBack (by StrongLoop, an IBM company) for data modeling. While MongoDB had been available only through Compose.com, last October it, along with our other databases, was made available "natively" on Bluemix.

Having everything running from a single platform has other benefits, including seamless continuous deployments. "As we slip in a feature set, it's five minutes at the most now to push all the changes to everything. And we're quite excited about the newly released Compose API. We think we might even be able to do some configuration of the database itself through the API, which would be great," said Jordan.

As for why they selected Compose, Tony explained, "One of the things we love about Compose is that performance-wise, it has been great. The NoSQL capabilities of MongoDB has let us really rev on our structure underneath. We've been able to really both expand, test, change, mold, and modify very, very quickly. And we haven't had a single outage with Compose; it's been rock solid."

Learn more about Interloop and check out the latest version of their platform at www.interloop.ai.