The power of software to help us understand the world is immense and companies like DroneDeploy are bringing that power to everyone; their goal is to make the sky more accessible and productive for anyone. That includes the farmer looking for better crop yields, the architect looking to restore a cathedral or the miner wanting to optimize his excavations.

To help them farm, build or manage, they all have to be able to measure the world. The company's innovative approach uses commercial drones that anyone can buy and software which programs them to the task. It teaches the drones how to automatically scan areas and return with a payload of photos.

Without intelligent software, that payload is of little use. The next step is for the images to be uploaded into the cloud where DroneDeploy stitches them together into maps and 3D models using its Map Engine. The user can then explore the completed maps and models with analytical tools within the easy-to-use mobile or web-based viewer to obtain useful insights. For example, near-infrared scans of crops can be interpreted using vegetation indices to aid searching for crop stress, or measurements can be made that can show the volumes of stockpiles around a quarry.


Cornwall Cliff by DroneDeploy on Sketchfab

More maps and models are available in the DroneDeploy gallery.

The maps and models are then available on desktop or hand-held devices in the field. For example, a farmer could see a near-infrared scan of his fields with crop stress picked out in red. He can then go to those locations and see the "ground truth" by walking to the plants and taking notes. Pilkington explained: "DroneDeploy isn't going to tell the farmer today if it's a lack of nitrogen or it's pests, but if you're a farmer that's managing 2000 acres of 11ft corn you can get a map every morning and don't need to rely on satellite imagery." The drone imagery is unaffected by clouds which cut off satellite imagery and comes in at a higher resolution. "You can zoom in and see the individual plants which is pretty cool" says Pilkington. That same information can also be used to feed the emerging next generation of decision-making applications in precision agriculture. 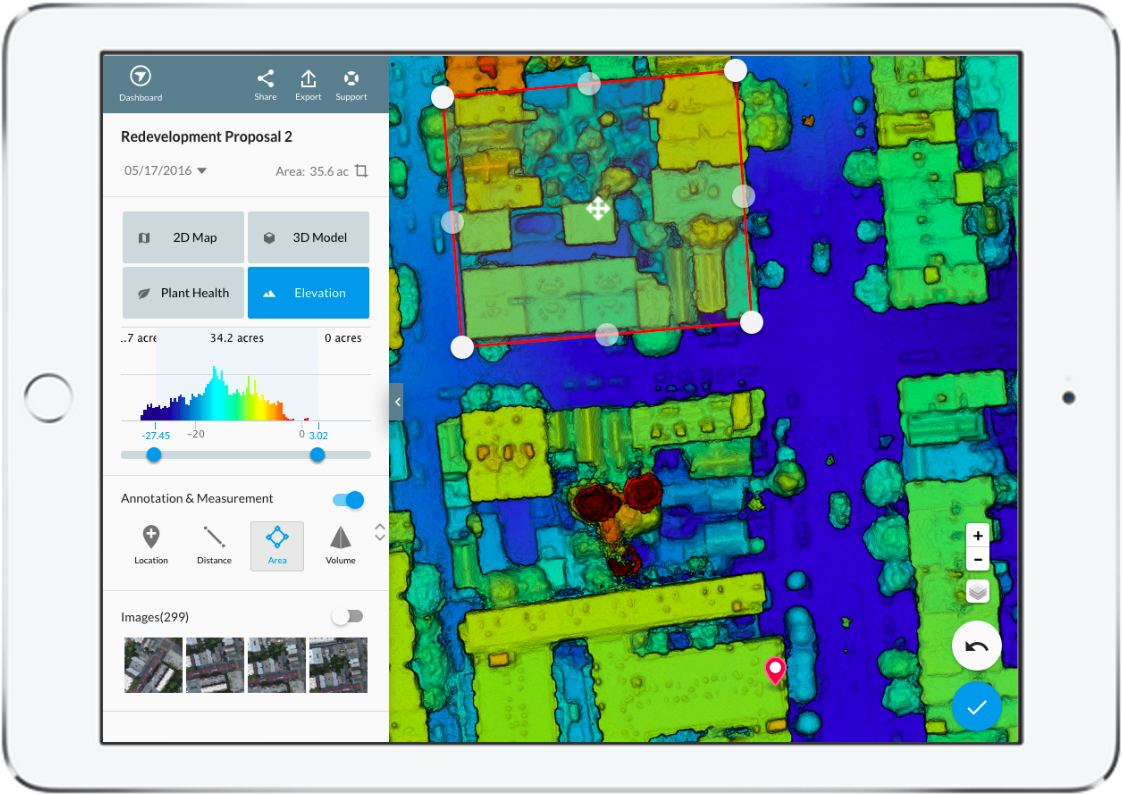 The latest version of DroneDeploy's app - more at their blog

Behind the scenes, the whole process is powered by DroneDeploy's Map Engine which plugs into Compose databases. DroneDeploy started with Compose back when it was MongoHQ. The early decision to store data in NoSQL came out of them mainly operating on time-series data. Documents about flights, locations, images and other items that don’t have many relations encoded made MongoDB a sensible choice for them. As a small company that didn't want to invest in self-hosting, they decided to go with a Database-as-a-Service provider and that provider was Compose.

Early experience with MongoDB on Compose helped shape an architecture where documents were handled and then quickly moved to lower cost storage. This allowed them to optimize their costs while handling the stream of data. Over time they've expanded their database technology use. Redis came into the picture as their jobs and coordination requirements built up. These required a rapid database and Redis' in-memory processing offers a route to performance for applications. There are queues, lists and sets which can be used to represent the jobs, settings and resources available and they are all tightly managed.

DroneDeploy saw the advantages and they brought Compose Redis online to handle that. This also allowed them to lift the load on Compose MongoDB's more persistent model and boost their application performance. The timing was fortuitous as Compose had just made Redis available as an offering. "We make much heavier use of Compose than initially and now we're starting to use Redis more heavily because we have thousands of jobs being orchestrated all around the world" says Pilkington. "We've got a bunch of different job queues that manage that depending on the sort of user, allowed concurrency and type of processing job it is and all of that is coming through Redis."

The MongoDB and Redis combination is a mix that many companies have found compelling for their core infrastructure, offloading other operations to more appropriate or cost effective databases as needed.

What Compose has given DroneDeploy is the ability to concentrate on running their business, not how to run databases. That concentration has enabled DroneDeploy to offer a product which can help millions of people understand and manage their world.